I read an article in The Times of Israel about Moore’s new “documentary” in which Moore throws around comparisons of Trump to Hitler. The problem is, in the article, there isn’t anything actually said that describes precisely WHAT it is that makes comparisons between Donald Trump and Adolf Hitler seem valid.

It caused me to realize that is a watershed moment for me in the constant barrage of sewerage about Donald Trump being Hitler or acting like Hitler or being a wannabe Dictator or being a threat to the lives and well being of innocent Americans.

I have always assumed that rational people across the spectrum of USA society understand that the hyperbole and hysteria is just that – hyperbole and hysteria. But seeing the Times of Israel actually giving a mention of such dreck by the Porcine Moore made me realize that this stuff needs to be forcibly ground into fertilizer. Repeatedly.

There are a number of things that are offensive about this sickening pandering by people like Moore to try to throw a disgusting label at someone merely to make them seem bad for having been insulted. It is anti-semitism of course, no big surprise that the left in America is Anti-Semitic. It is also moronic, it is name calling at the level of kindergarteners. It is also ignorant – “those who do not study history are doomed to repeat it” is the quote that usually gets thrown in at this point – as I have just done so. And to cap it off – the people who post it do so in expression of their contempt for their own “followers” whom they consider too stupid to actually realize what is being done.

I’ll start with the first thing on my list. How is a Flabby White Rich Guy insulting Donald Trump being anti-semitic? How can this be?

I am assuming everyone knows the story of Adolf Hitler. Well everyone except for Michael Moore of course. He does not seem to have studied anything at all to do with the subject. Hitler, born in Austria, served on the Western Front in WWI and was part of the defeated German Army. After wandering around he settled in Munich and started developing his own socialist party. He used gangs of street thugs to break up the Free speech of others, organized his followers into almost military groupings and inspired a small (and unsuccessful) revolution which resulted in him going to jail.

Like many revolutionaries time in jail increased his ‘cred” and gave him a chance to write the book that would show the world what he wanted to do. The book is called Mein Kampf (My struggle) and would become the item that would signify to those who would follow Hitler that they were agreeing with an intellectual tour de force. Not just some sociopath who found he could inspire others by book pamphlet and speech. The book was no Tour de force. It is a turgid windy series of tedious lectures.

From those small beginning Hitler rose from being a small little agitator to militarizing an entire nation. He created mechanisms and institutions to terrify his own people and to control them. He created secret organizations to watch and report and act against anyone deemed disloyal. He built an entire military industrial organization controlled by The SS and used slave labor to produce the things that were needed. He promoted men into positions where they set about trying to exterminate an entire religion from the face of the earth – the Jewish people.

They turned genocide into an industrial process.

Hitler created a society where many people were trying to exterminate others. He plunged the world into war – again. German armies conquered most of Europe and brutally enforced NAZI rule.

It took the resources of an entire nation directed by sociopaths to work for years to accomplish all the horrors of NAZI Germany. It was not a whim. It didn’t happen overnight, it wasn’t a “tantrum” that got out of hand it was something that went on and on for over a decade.

I put that last paragraph in just to put it somewhat in context.

So when some bloviating ball of lard says he sees “hallmarks of Hitler” in regard to President Trump – that is what he is referring to. And it is beyond stupid and demented.

And, as I said, it is Anti-Semitic.

Moore – and the others who forward this garbage are trying to paint themselves as being the ‘victims” of a would be Hitler. Just like the Jews in the 1933 to 1945 era. The problem is they are not. The left is anti-Jewish and anti-Semitic. The left has a long and disgusting record of supporting terrorists who would destroy Israel.

And – frankly – part of their shtick on this subject is to downgrade and belittle what happened to the Jewish people in Europe during that time. By comparing themselves, poor widdle people who lost an election, as being the equivalent of 6 million people hunted down and hounded to death makes that grotesque stain on humanity appear to be commonplace. By trivializing its memory they are making the Jewish people targets again.

Thats why I call it anti-Semitism. I am not Jewish, just a supporter of Israel and of the rights of individuals and I am tired of seeing shameless people trying to promote their own version of victimhood on the backs of 6 million real victims of real evil.

Now to deal with “moronic” and “ignorant”.

People calling Donald Trump “Hitler” are being morons when they say it, just because they want to say something bad about Trump. They do not have anything realistic to complain about on the whole Hitler comparison because there isn’t one that can be made but they know that “Hitler – really bad” so they throw it around in the hope that others might no spot the fact that they are being total idiots.

And then there is “ignorance’. This is the most fascinating faction of these people. They do not have any idea of history – at all. Most of the time they do not understand that Hitler sought to control Germany using the tools of socialism. He named his party Nationalsozialistische Deutsche Arbeiterpartei (translated it means National Socialist German Workers Party)in line with his own aims and beliefs. He created massive government entities to enforce compliance and punish resistance. He militarized the police and created secret courts that executed hundreds of thousands of German Citizens.

Where private companies did not work to what the NAZI Party wanted they created their own state run empires inside the country.

They created an overwhelmingly powerful state apparatus linked under the guiding hand of the Fuhrer.

People were rounded up in the middle of the night, secretly imprisoned. Many were executed or were sent to be worked to death in work camps.

Now before you allow someone to say “Trump is like Hitler” ask them to look around and see if they can see any of that crap going on in this country?

Challenge them to honestly tell of you of things they have personally seen that enable them to have this grotesque opinion that they are shouting.

Name one damned thing that they say Trump has done which warrants their baseless garbage?

Reduced taxes? More jobs? Reduced ridiculous rules put into effect by people trying to ram through their own ideologies to the detriment of the American people? How the hell is this like “Hitler”. It is the exact opposite.

I think there are valid criticisms that could be made of President Trump – he’s a good human being with all the flaws that come along with that. Criticize the flaw, offer arguments about better policy .

I am just annoyed beyond belief at the petty minded actions of a lot of people on the left who argue from ignorance and who mindlessly scream and attempt to drown out the debate of others. 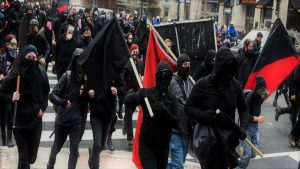 And just as one little observation – when thugs in black coveralls and boots start attacking protests and carrying flags that are based on the same design and color scheme of the Nazi flag – and you have ignored them – you have lost all moral authority to call anyone a NAZI.